I wonder if I can fix this battery?

The short answer is: No.

I have had the Yaesu FNB-102Li extended battery since I bought my VX-8R.. so a while. However, it died less than a year into owning it. The ‘normal’ or slim version has held up just fine. At Hamcom this year, I purchased a replacement from Batteries America for around $45. It beats the heck out of the $80+ for the Yaesu version which didn’t last anywhere nearly as long as it should have. For almost twice the price, you expect some additional quality, not worse. *shrug*

With a replacement in hand, I decided to take the defective battery apart. Who knows, maybe it will be easy to see what is wrong.. and possibly solder some new cells in. Heck, I’ve done it with my Dewalt cordless battery packs… this shouldn’t be much more difficult, right? Bzzzzz… WRONG.

First up. I tried to find the seam where the case/clamshell was joined. I figured they used some sort of snaps that might break since the label clearly calls out how much of a bad idea it is to try to open the battery up. I get it. Lithium batteries are nasty beasties,  especially if you shoot them full of staples. 😉  Once I located what I thought was the seam, I took a small flat blade screwdriver and tried to pry it apart. No luck.

OK, time to be more aggressive. I then used a wider, but very thin bladed scraper and a small hammer to try to break whatever tabs were holding the two halves together. What I discovered was that there were no tabs. There were no spot welds. There were no carefully placed drops of adhesive. Nope. This thing was ultrasonic welded around the entire perimeter of the case. I basically had to peel the case apart, effectively destroying it in the process. No real loss at this point, but a disappointment nonetheless. I guess if I were to attempt a repair again, I could have taken a thin cutoff wheel and my rotary tool to score the seam a bit before attacking it with a blade.

If nothing else, now you can see what is inside of the FNB-102Li. You are welcome. 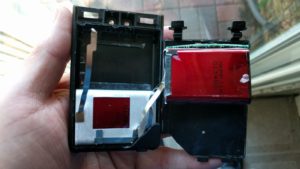