Bad news/Good news: I blew the engine in the Mazdaspeed 3 and the shop wanted $12000 to rebuild the engine. I checked other options, but nothing was going to be less than $8K. More than the car was worth. So, the good news is I got a new truck. A 2017 Chevy Colorado Z71 to be exact.

I decided this was a good time to upgrade the mobile unit and had been eyeballing the FTM-400XDR for a while now.

Below is the antenna bracket I used the Comet CV2ANTNCG which is designed for Silverado/Sierra full-size trucks. However, the profile is right for the Colorado, you just need to stack 2-3 fender washers UNDER the mount to raise it up a bit. I also decided to sand the edges down a bit, hit it with an etching primer and a black metallic texture paint to kind of match the truck. I like it better than the stainless steel. Note: I put the mount on the bracket and taped it up and taped where the mounting screw goes to make sure that ground contact was maintained. 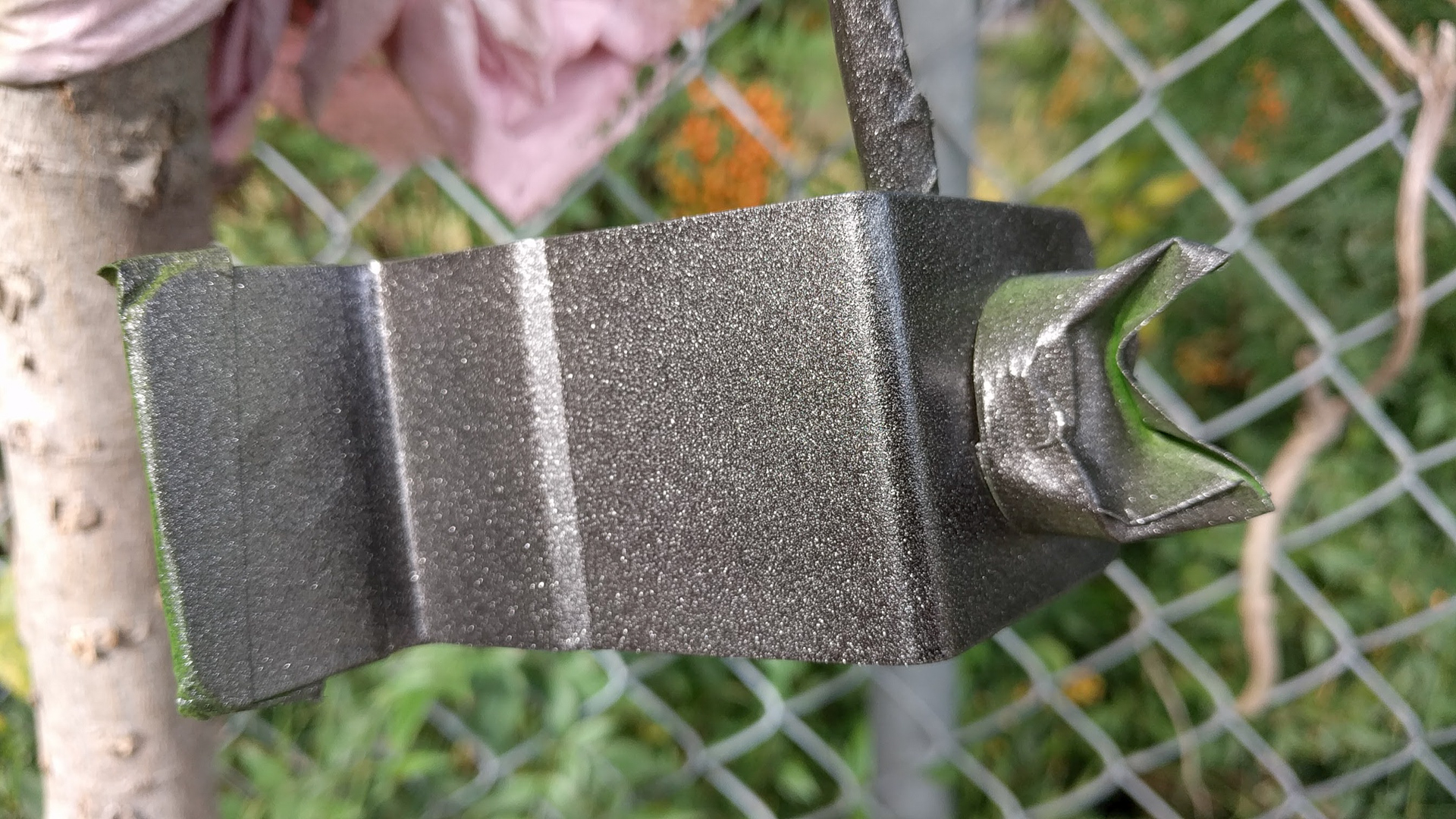 I wiped the bracket down with rubbing alcohol before priming and painting. This is the primer and paint I used. 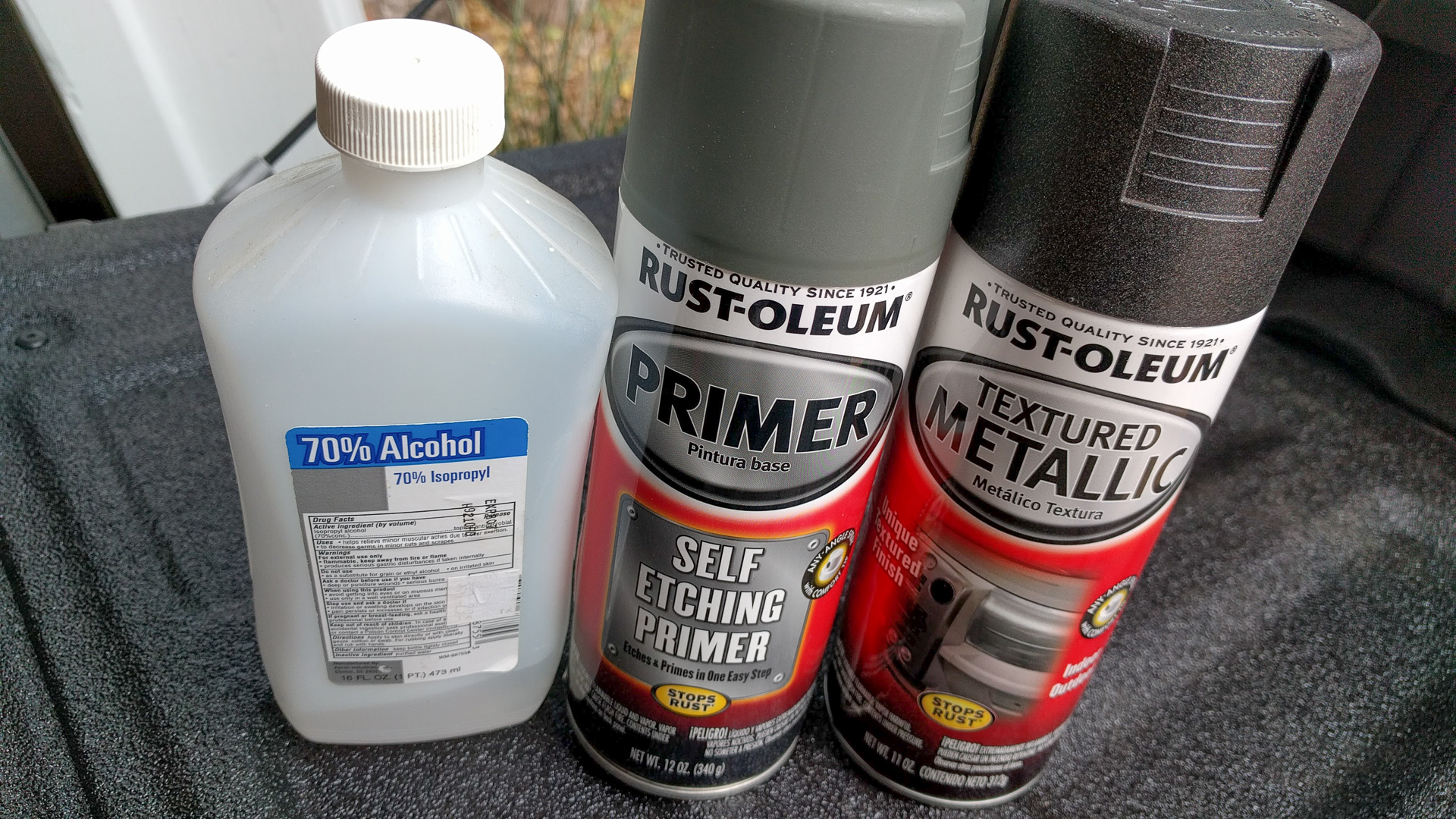 This is the space where I decided to install the controller unit. The base/body will be installed under the drivers seat. 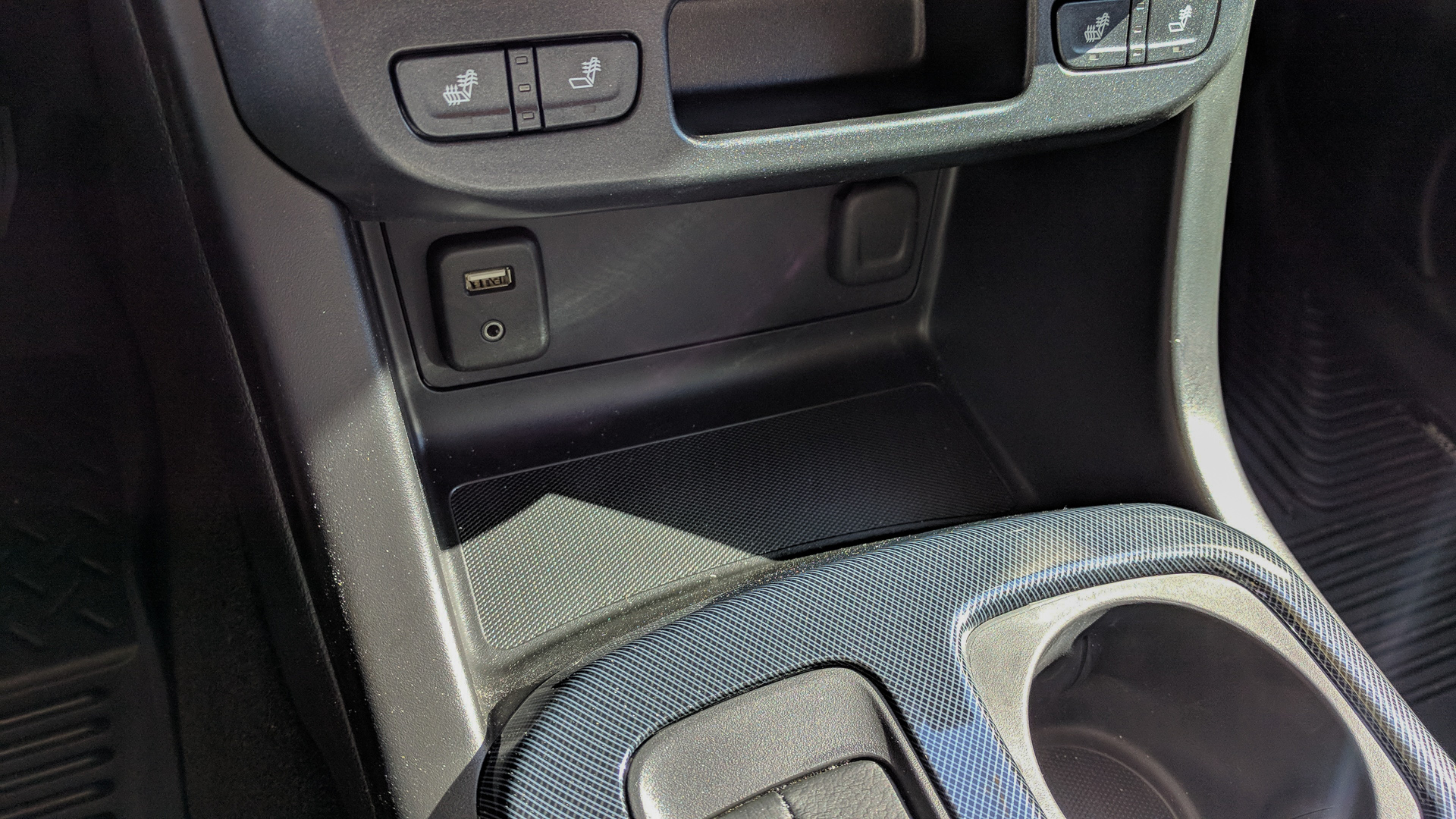 After I pulled a bunch of access panels off (I removed the shifter bezel, both side panels from the console, the bezel around the radio, the drivers seat, the sill panel, etc) I pulled out the heated seat switch panel. This will be critical to actually being able to fit the custom panel into the space below. 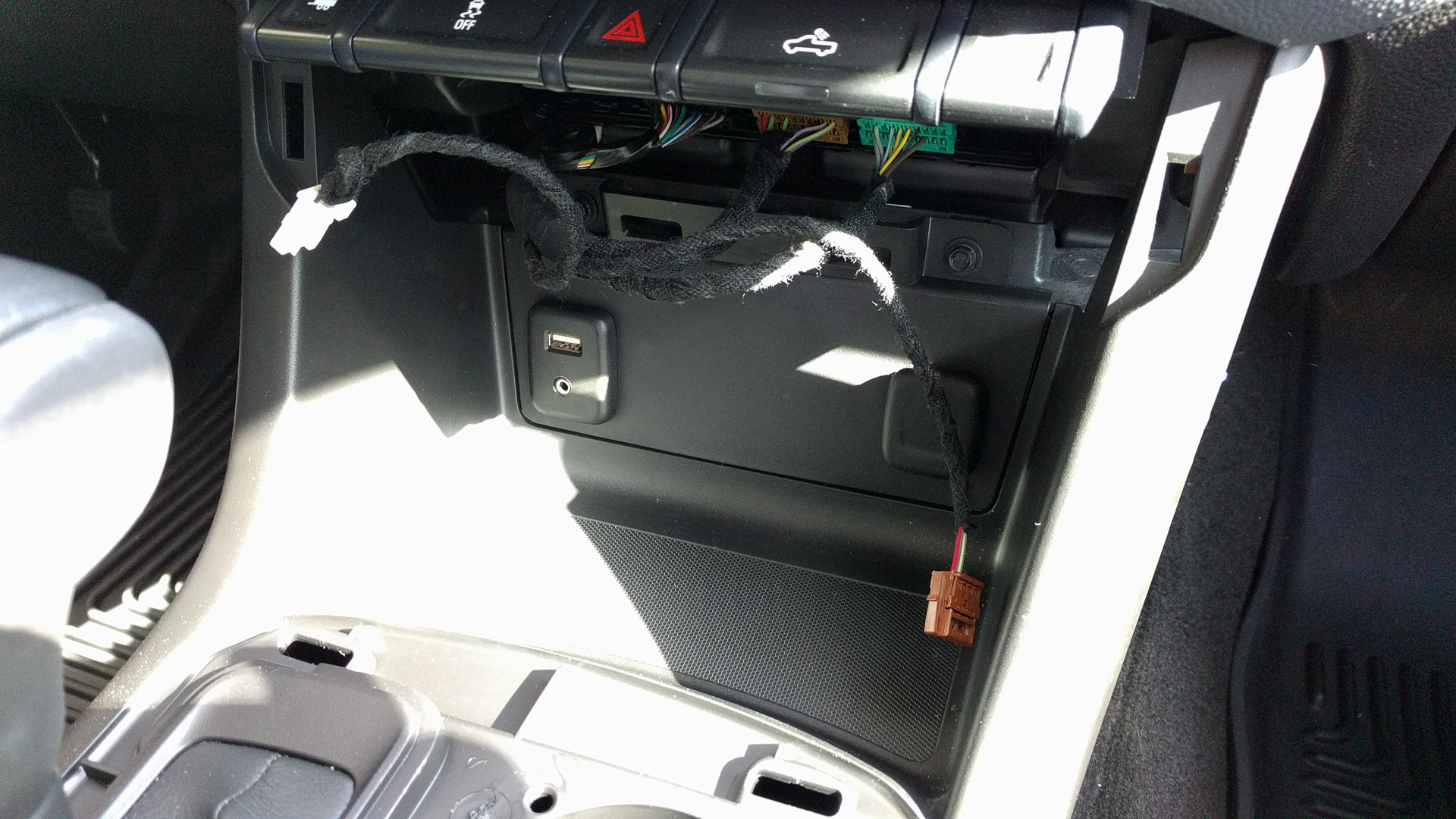 I am making the panel out of 1/4″ hardboard aka “masonite”. I decided that I would cut three strips and use 3M VHB tape to make back stop blocks to hold the new panel in place. 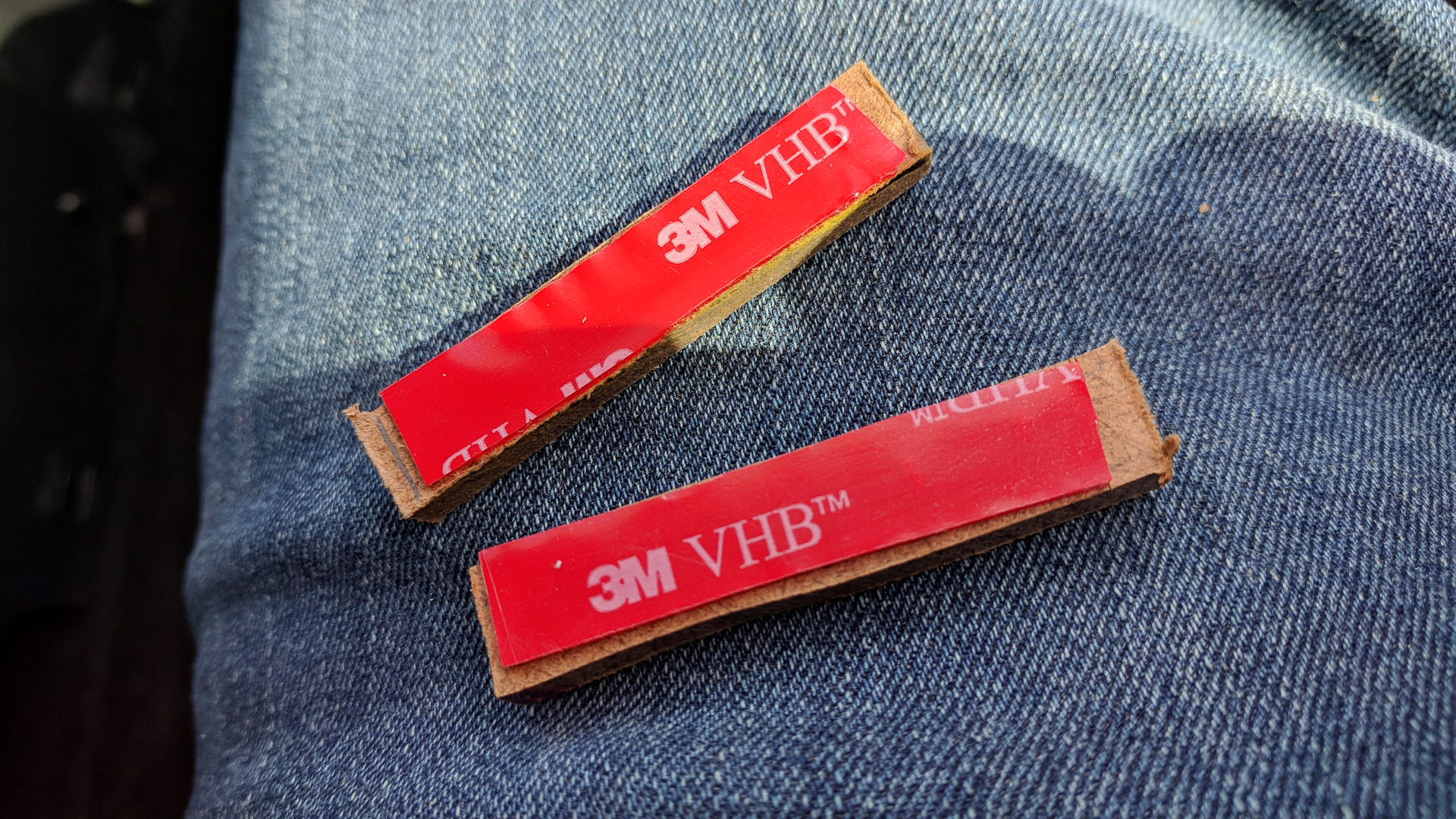 Here the stop blocks are in position. 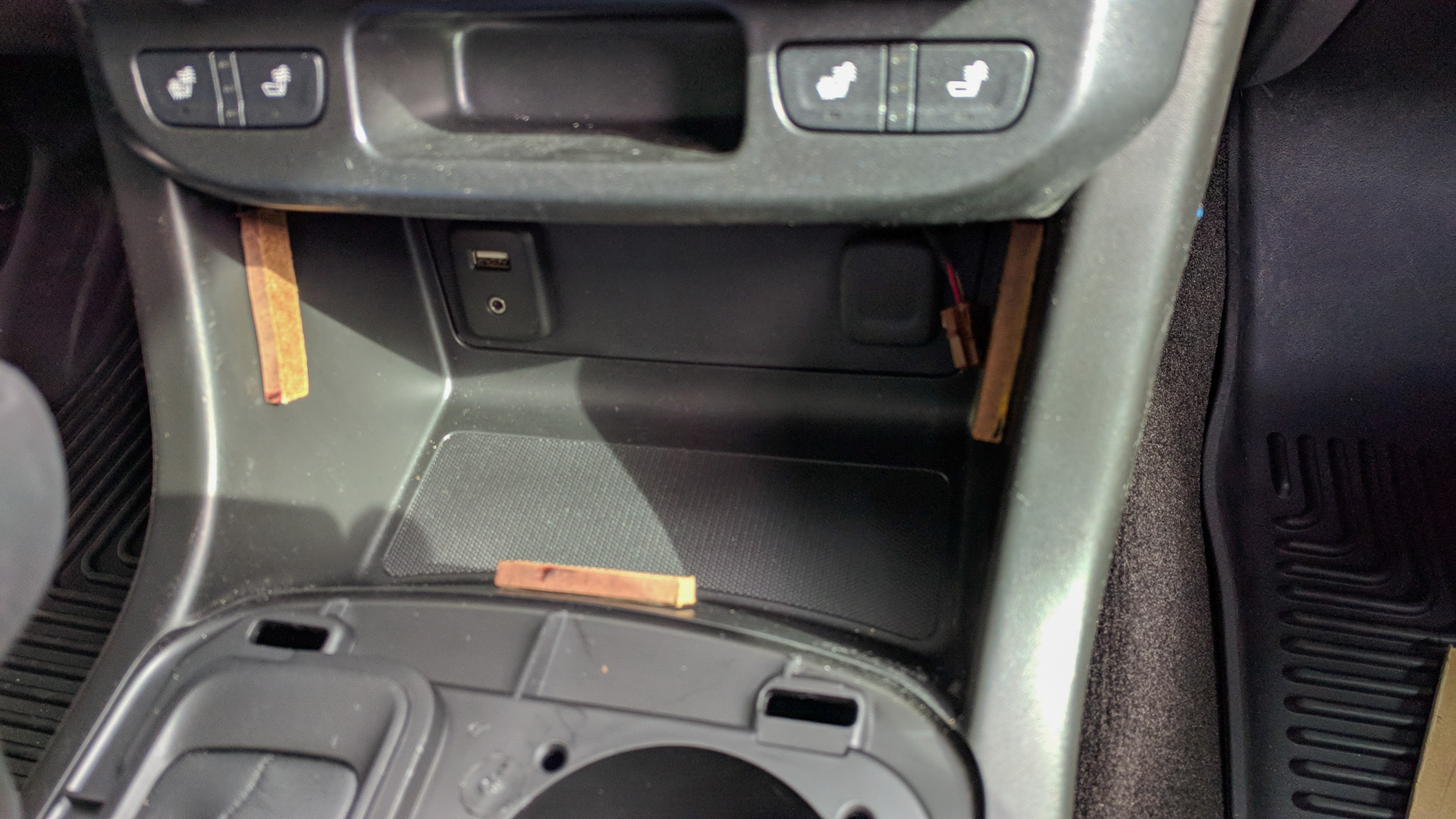 In order to find the size of the opening, I made some cardboard panels. I used a pencil to scribe the profiles to the top and bottom. I then used a belt sander to get down to the scribed line. After the top and bottom were fitting well, I taped the two pieces together to get the right height. 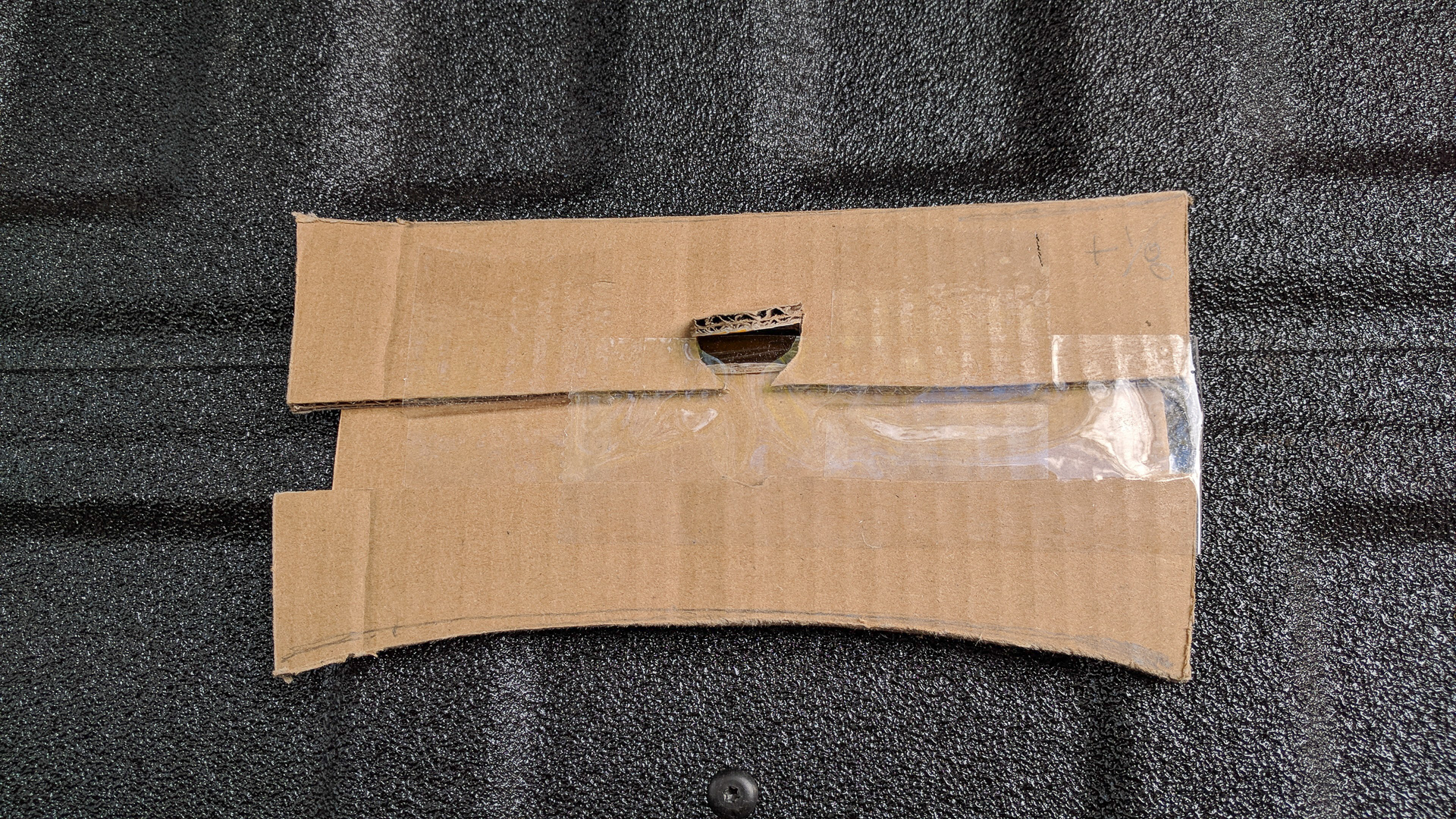 Once I had the basic dimension, I transferred the measurements to a new piece of cardboard which was intentionally over-sized by about 1/4 of an inch. I then went through the same shaping process with the belt grinder. Note.. I put a finger hole in the middle.. otherwise removing would have been challenging. 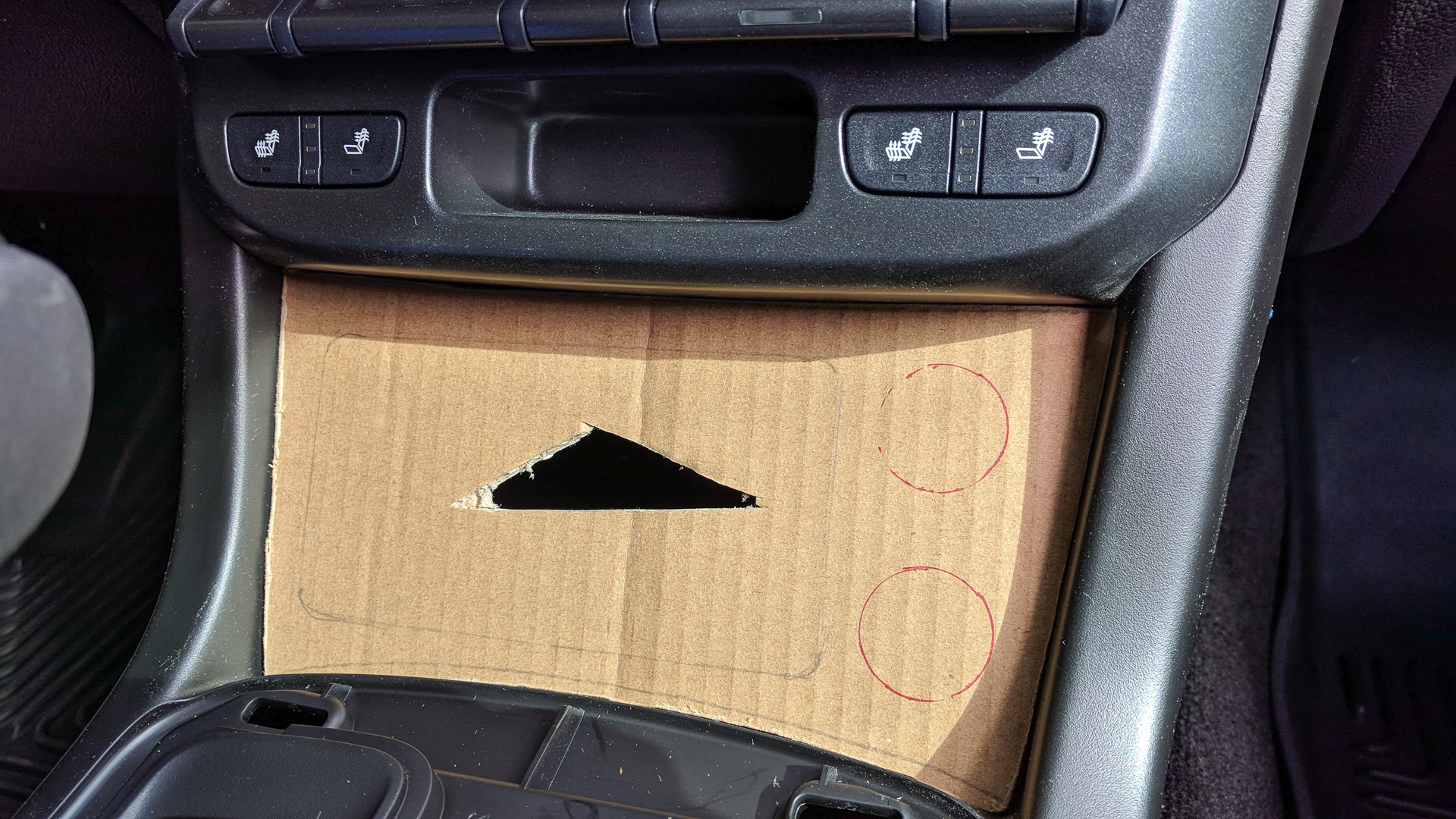 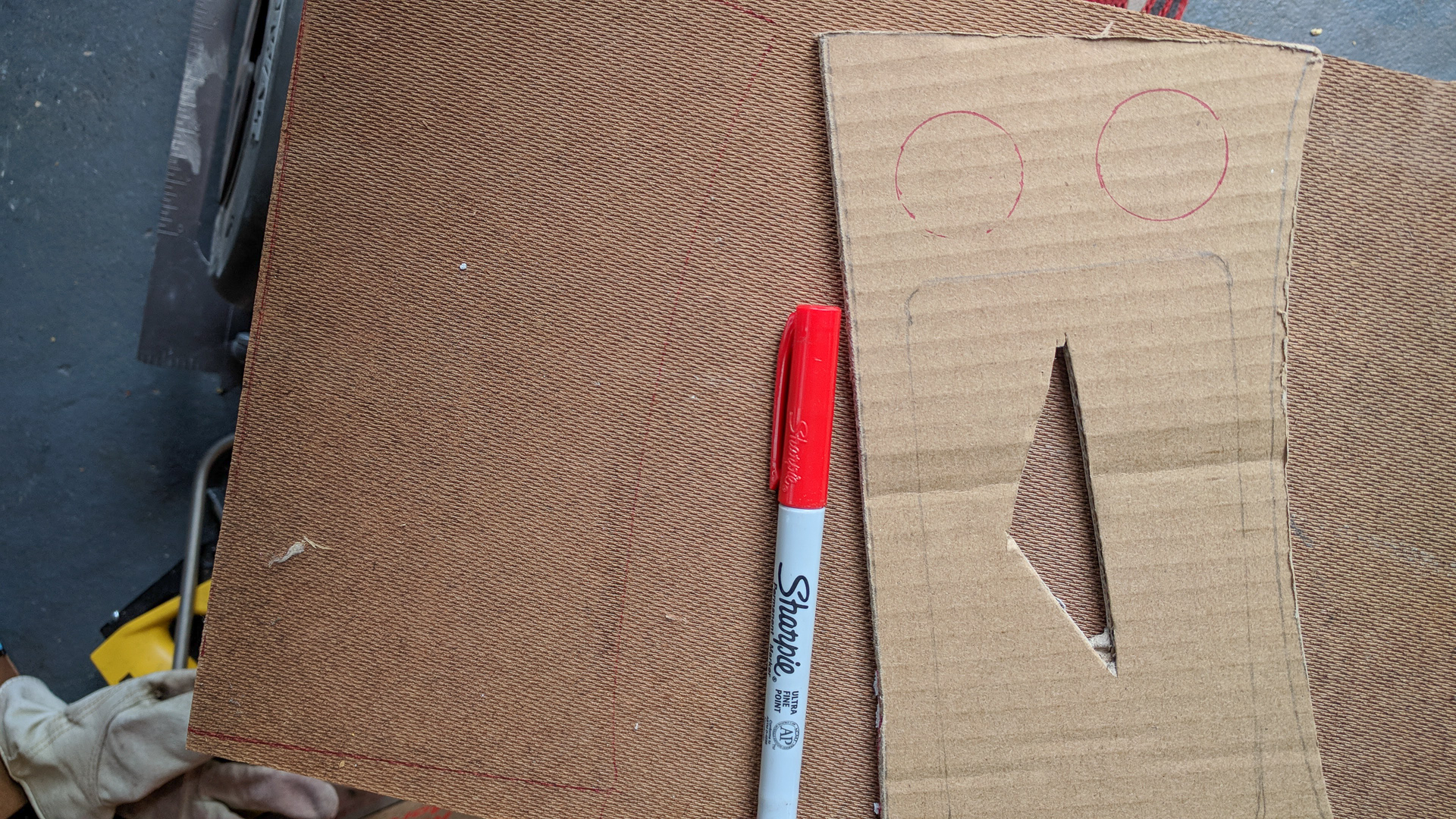 After I measured the radio controller with my calipers, I decided to do a quick template in SketchUp. I also will be installing a couple of through panel connectors for the microphone and so I can plug my phone in for Android Auto support and charging. It was easier to get an accurate layout in SketchUp and then print on a 1:1 format. I used an X-acto knife on my cutting mat to cut out the shape. I’m not worried about the circles for the panel connectors, all I need is the center. I will cut those holes with forstner bits. 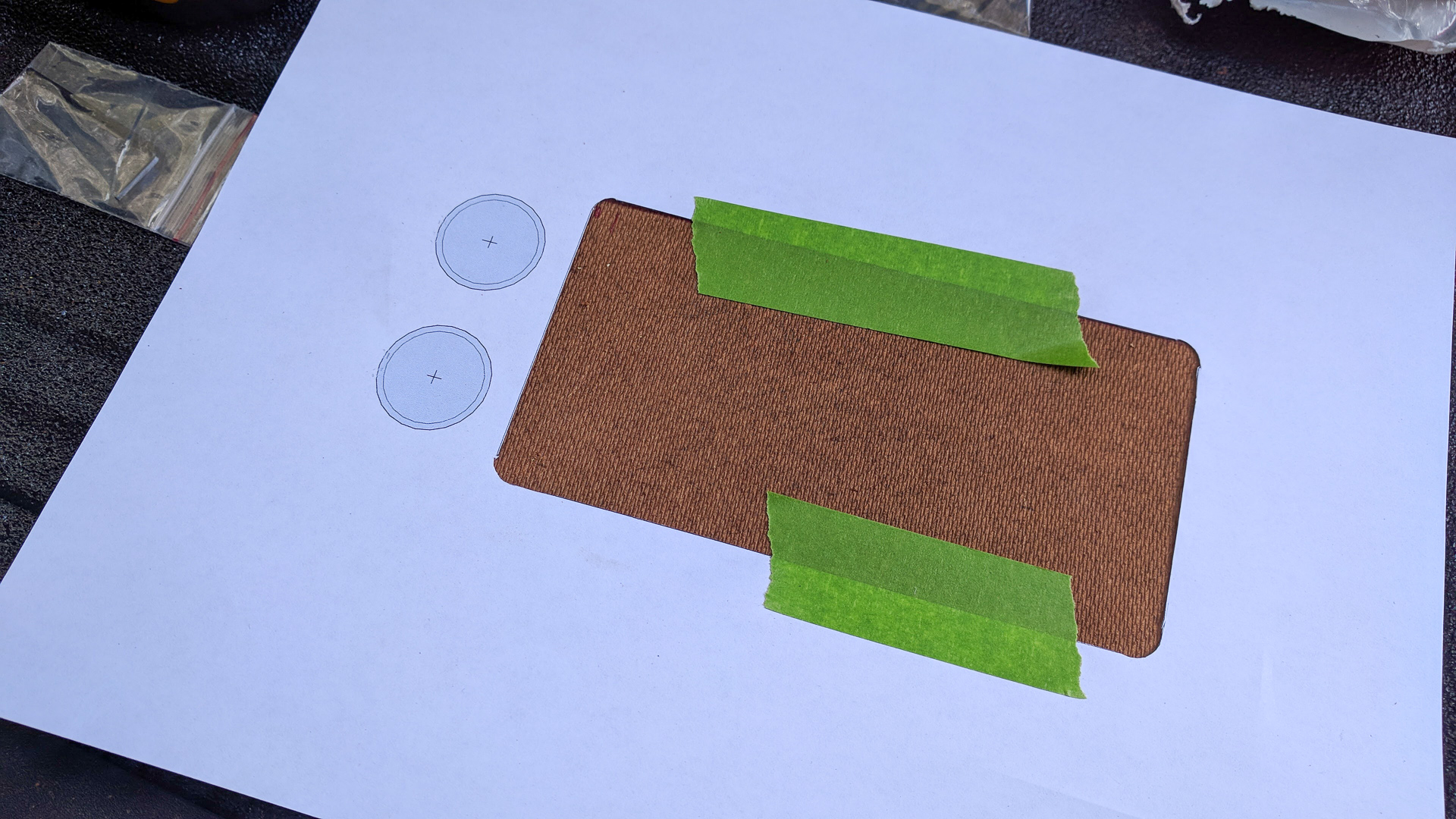 Here I have cut the radius of the corners with a forstner bit. 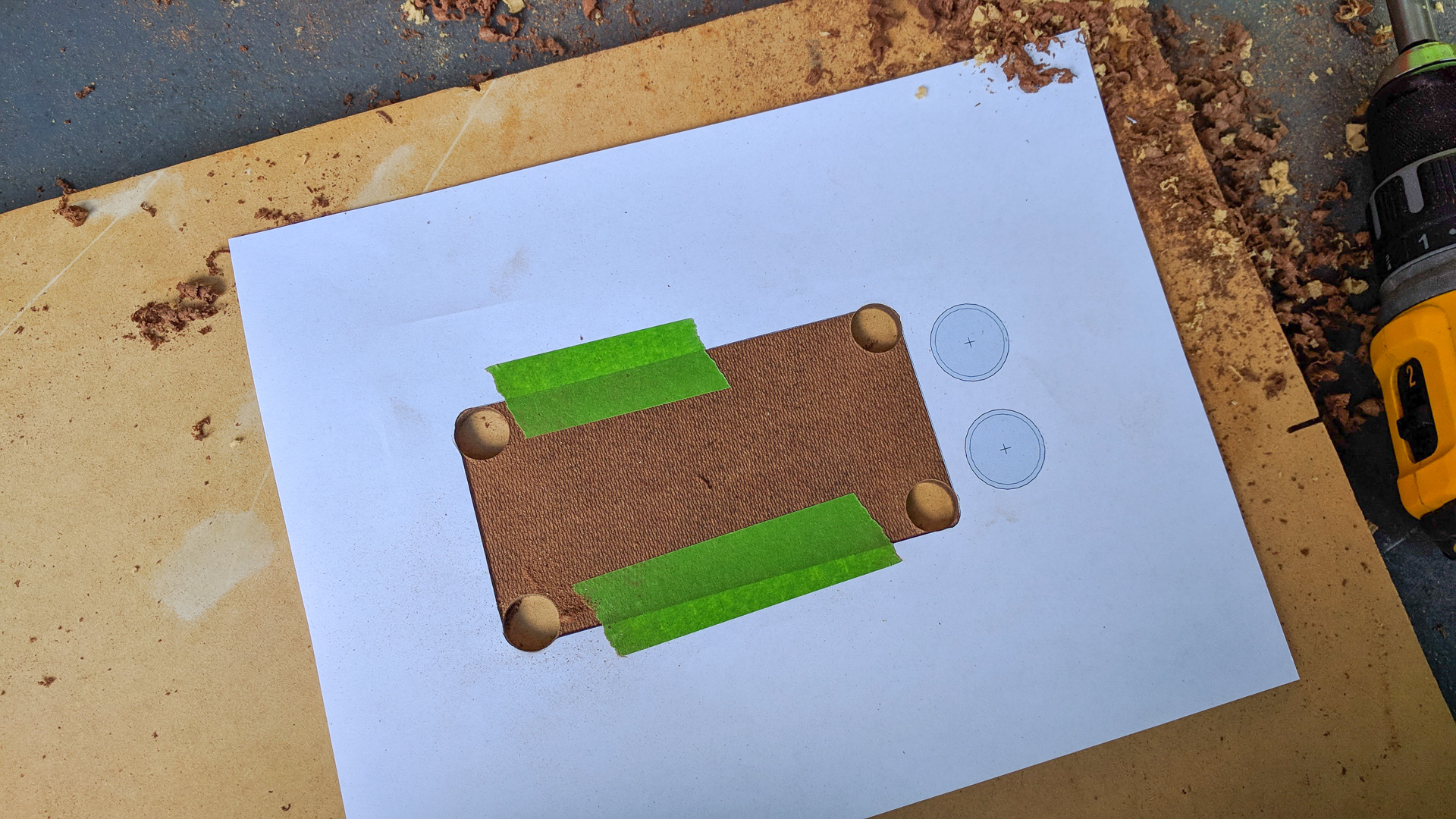 And here we are with the through-panel holes cut as well. 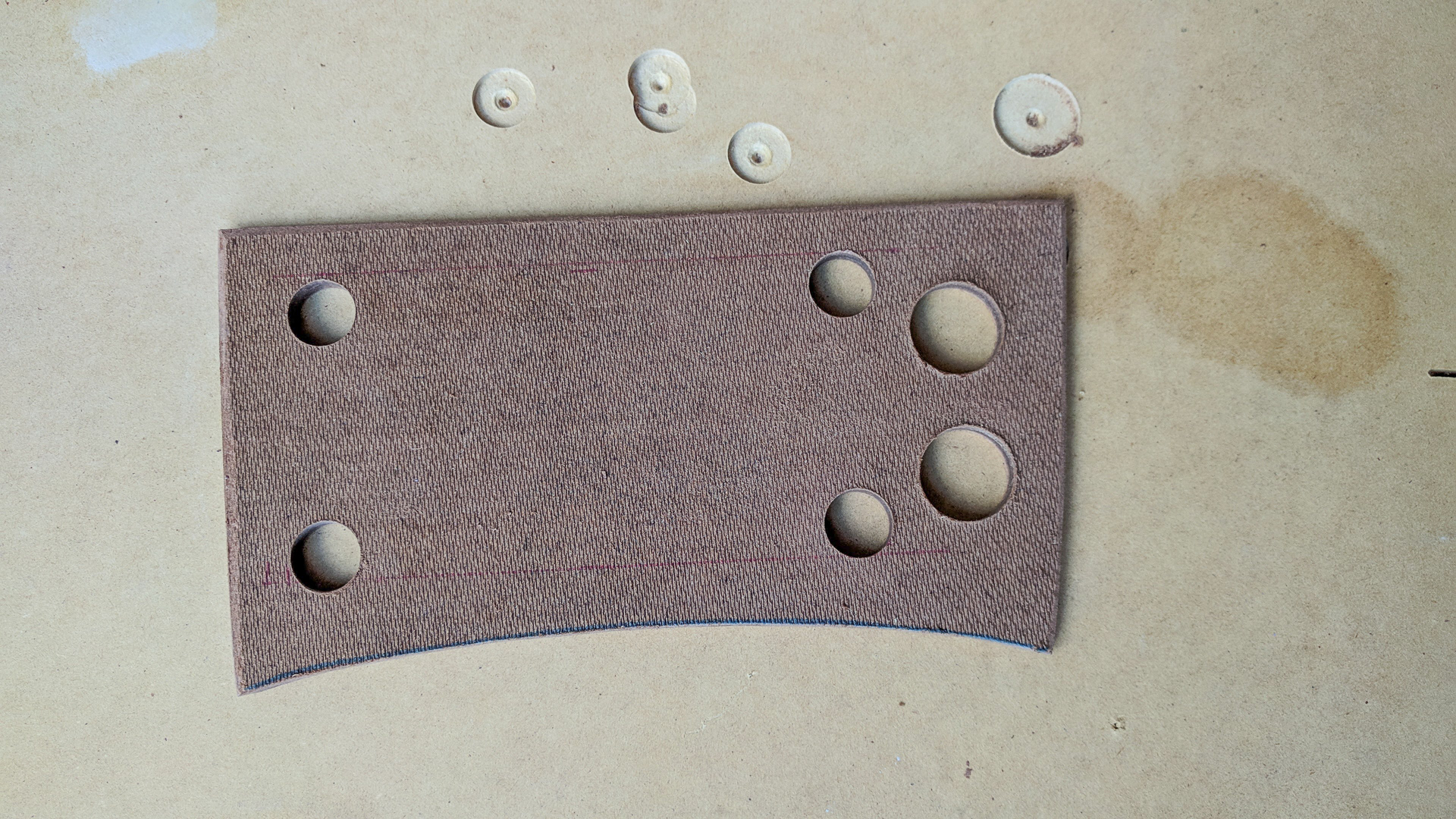 I used a half-round bastard file to smooth the edges up. This would have all gone better if I had used the router table.. but the garage is a disaster and I can’t even find it. 😉 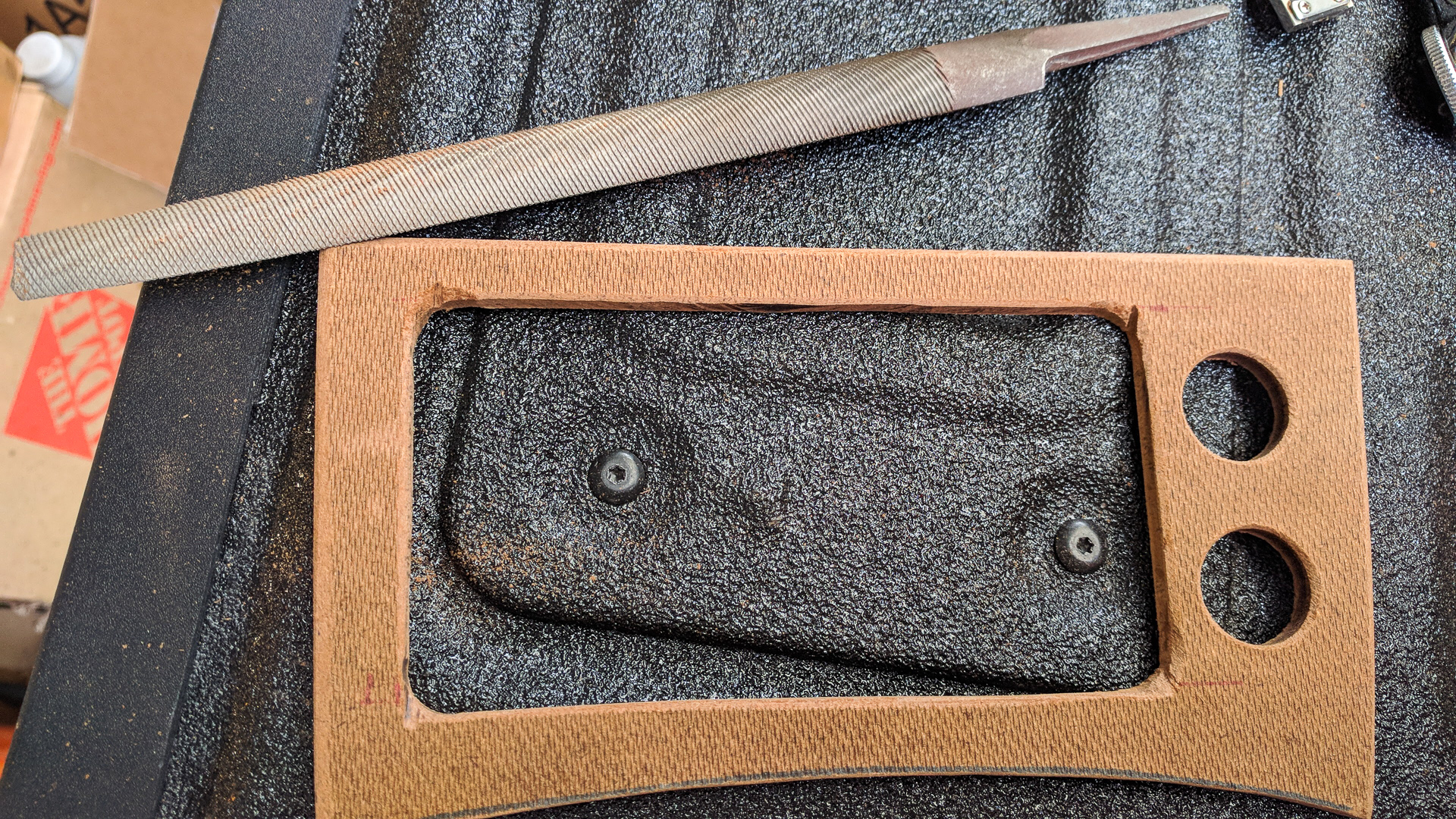 Dry-fitting the controller into the panel. The gaps are needed to allow for the vinyl. It actually ended up being so tight that I cut the vinyl with the controller as it was being forced into place. 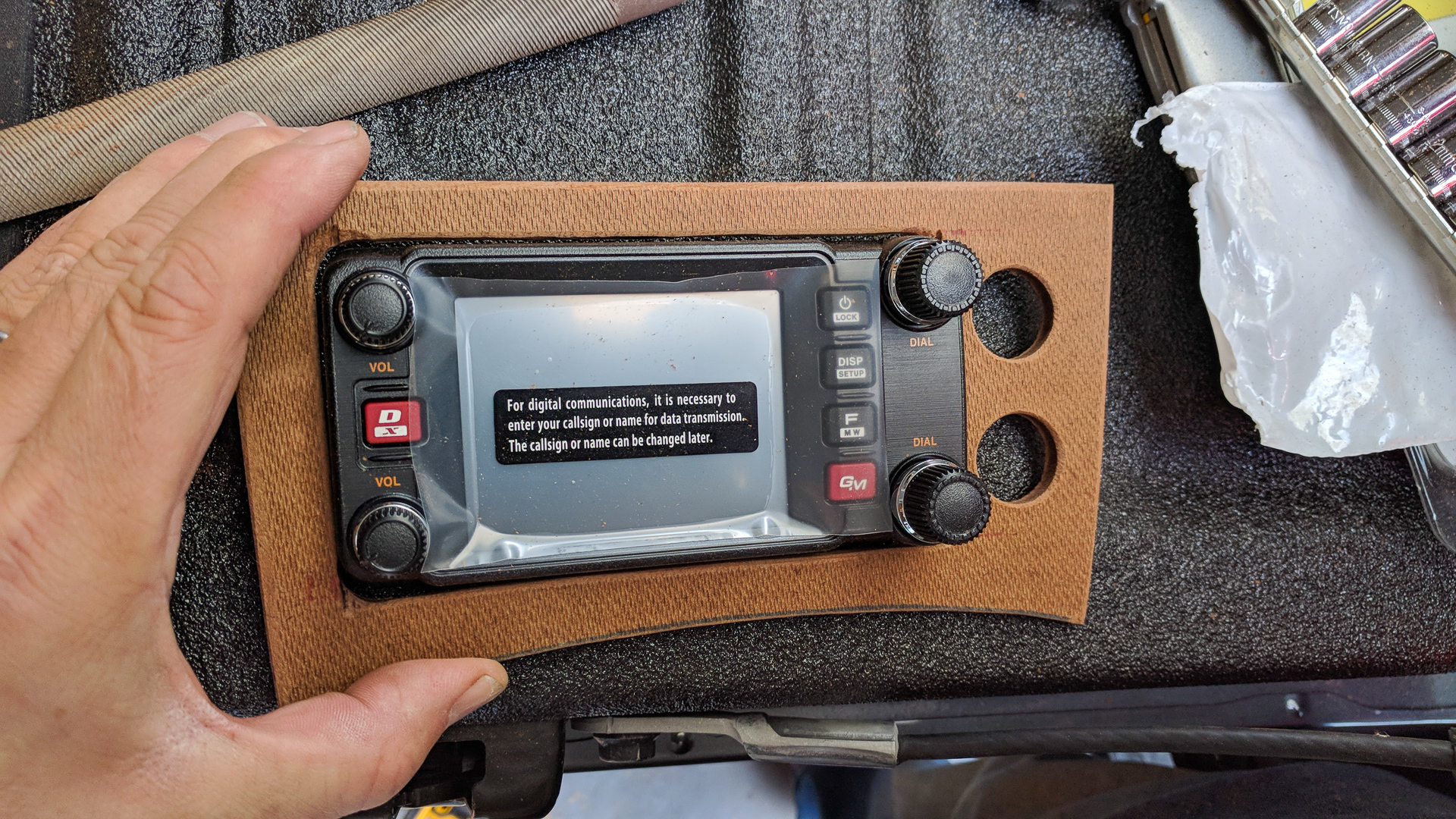 I used Barge Cement, but regular upholstery contact cement would have worked as well. I just had the Barge Cement and didn’t feel like buying something else. Like all contact cements, you apply to both parts and let them dry/set up. Then apply them to each other, carefully, because they will stick together! 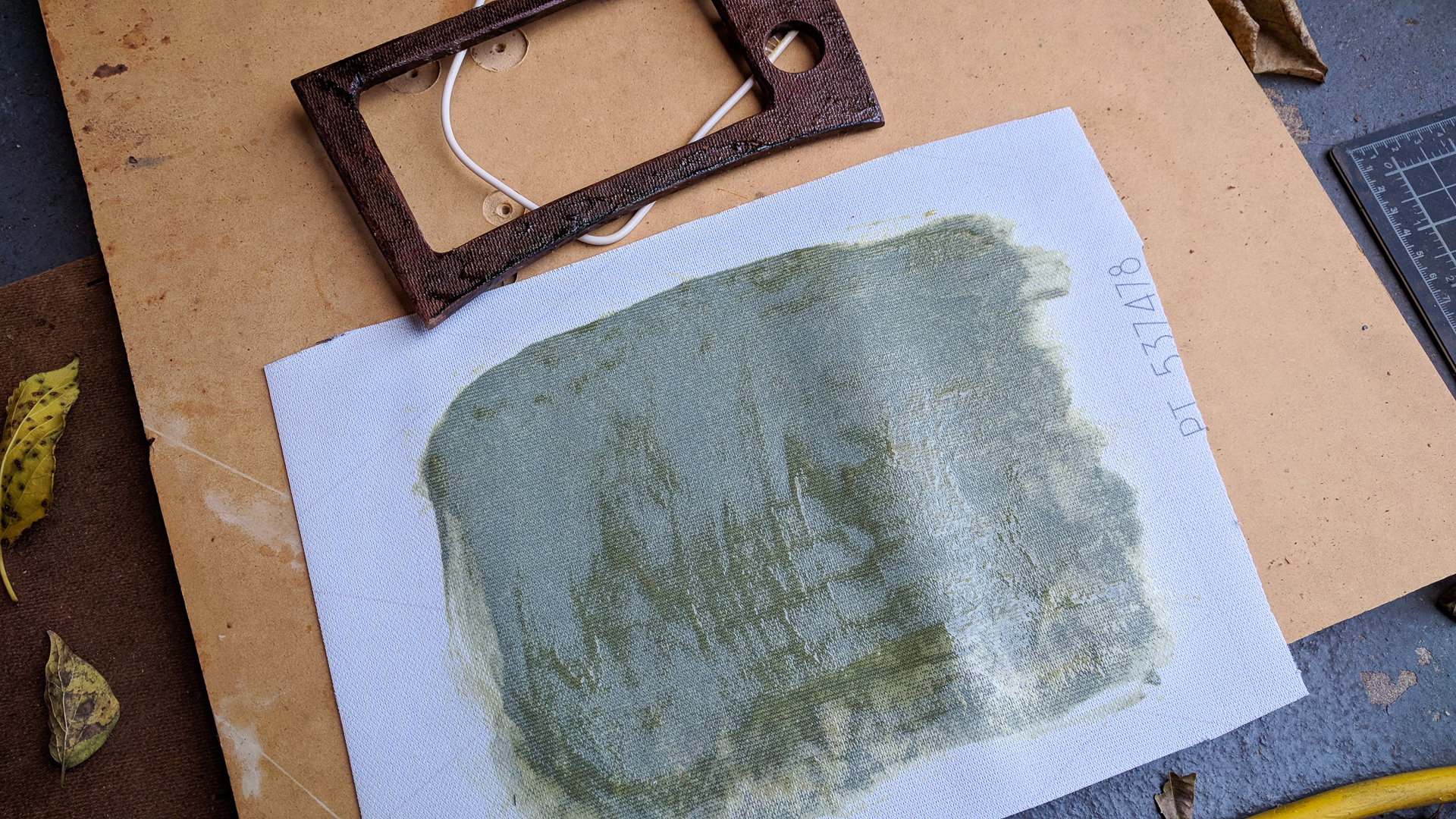 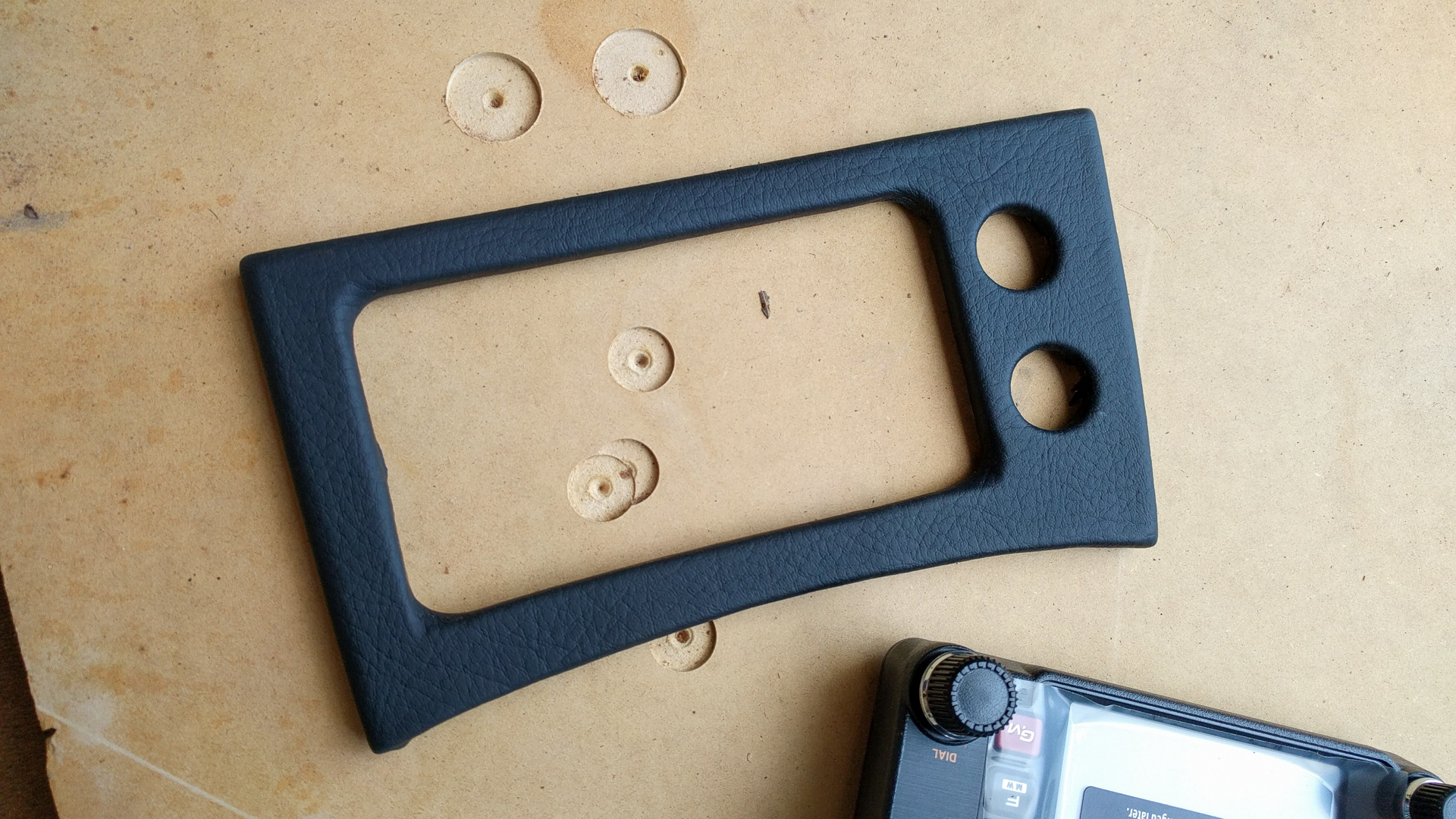 After I got the controller and panel mounts installed in the new panel, I put the backer nuts on the panel mounts, but wasn’t sure how to further hold the controller in. Honestly, it is such a tight fit that I doubt it would have gone anywhere. However, to be safe, I lined the entire back edge with Ultra Black silicone gasket maker. Again, I had it on hand. 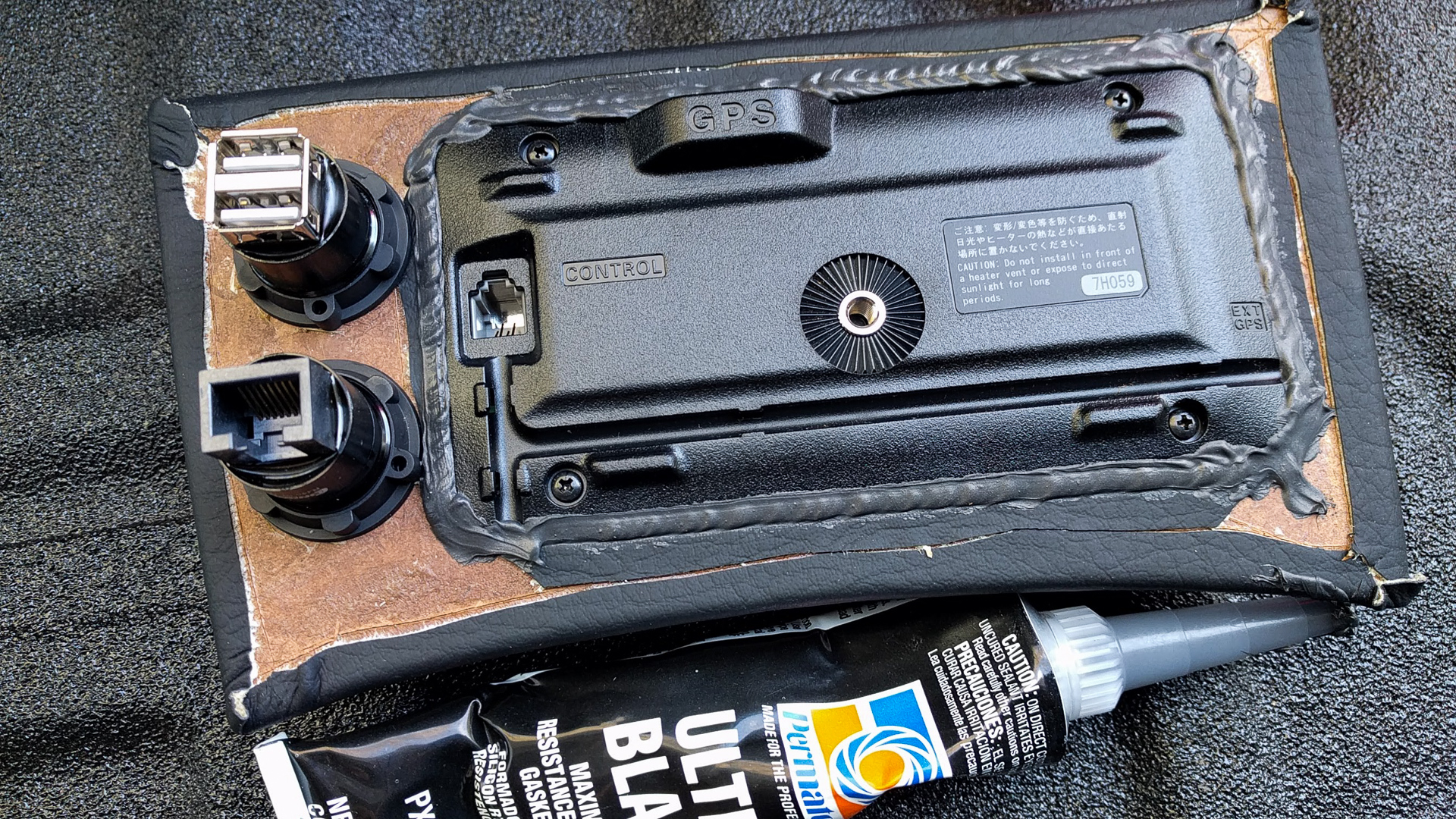 Here’s where I ended up mounting the base unit under the driver’s seat. I started out on top of the hump, but discovered that is where the seat motor is. I’m not perfectly happy with where it is because the motor does rub on the top (can be fixed by drilling some new holes in the bracket and lowering the radio) and it interferes with my rear molded floor mat. The radio is under the front part of the mat. I guess that is better than people putting their feet directly on the radio, but it isn’t what I envisioned, and don’t have a way to fix it. So.. is what it is. 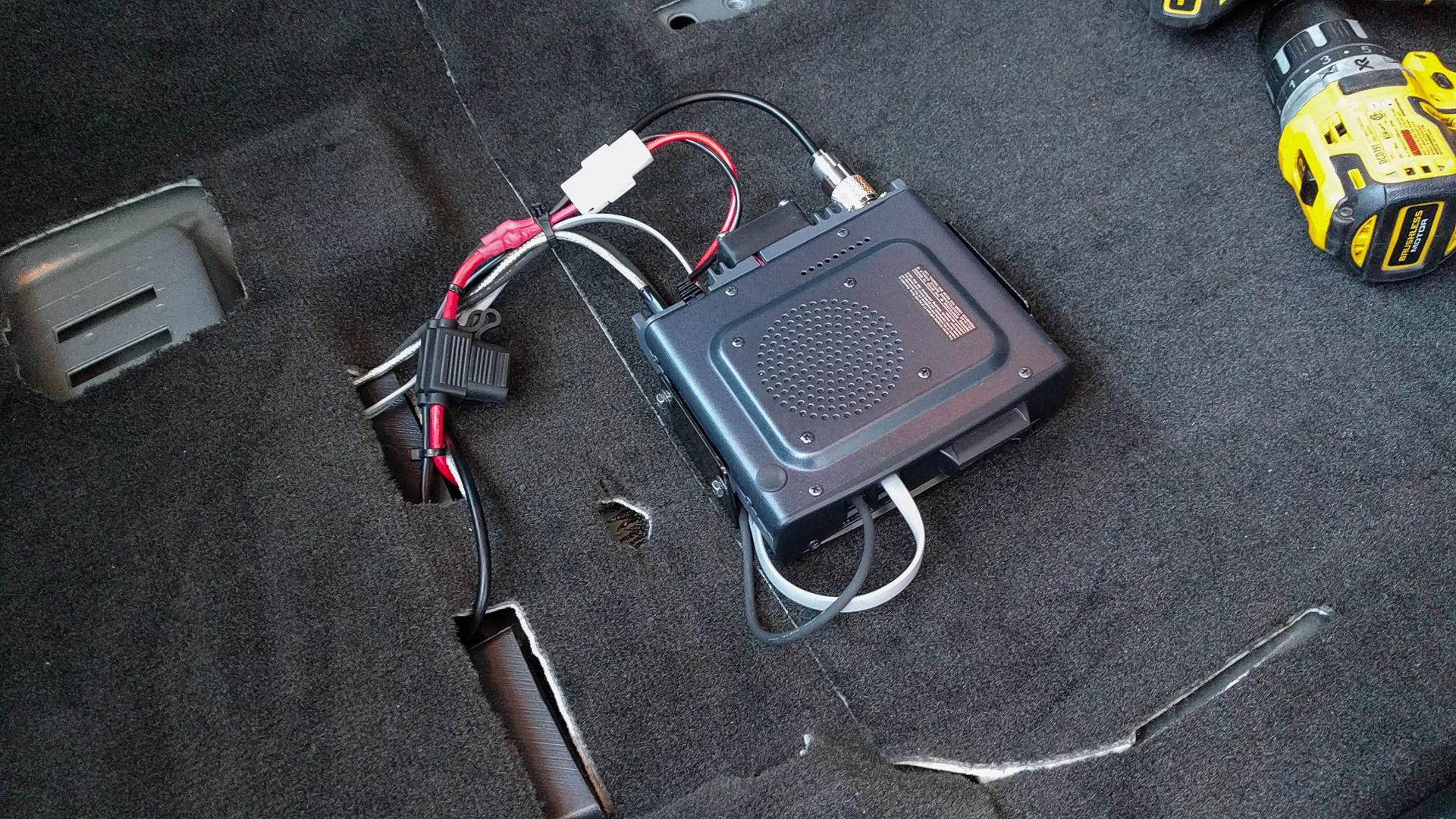 All done! Now I have to figure out how to program all of the local repeaters! 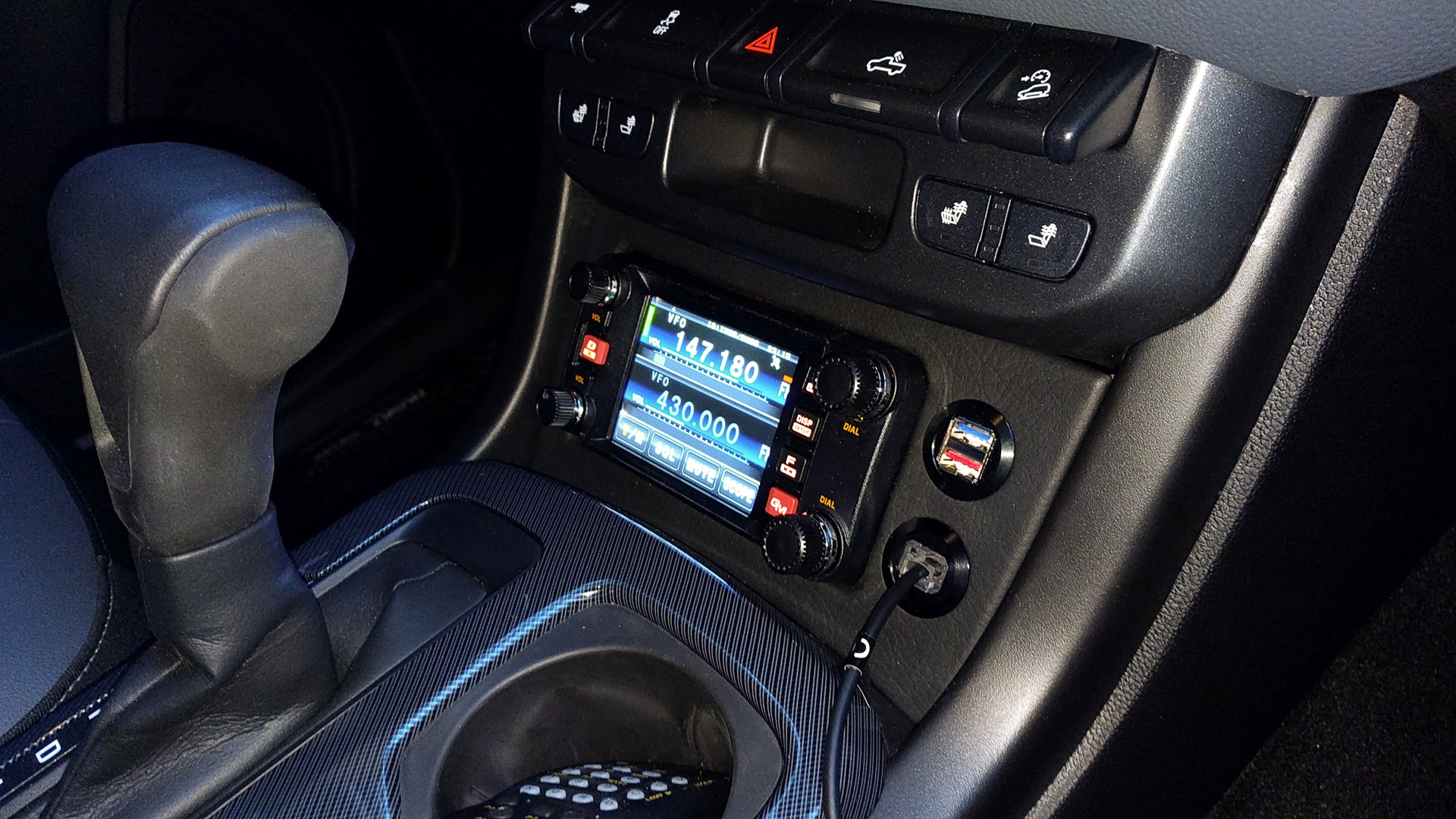 EDIT 16 July 2018 – added the photos below to satisfy a request as to how the antenna was mounted. 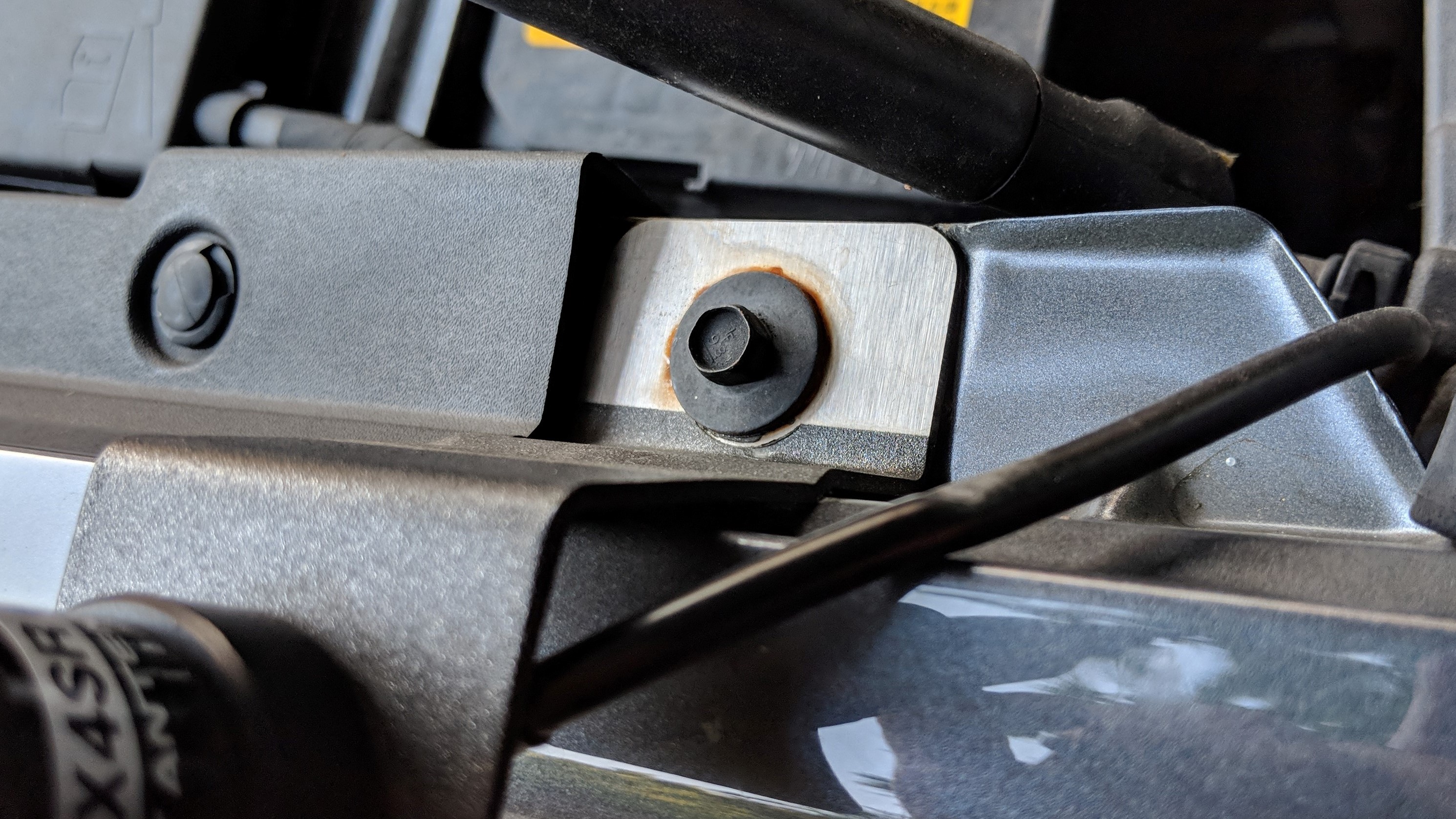 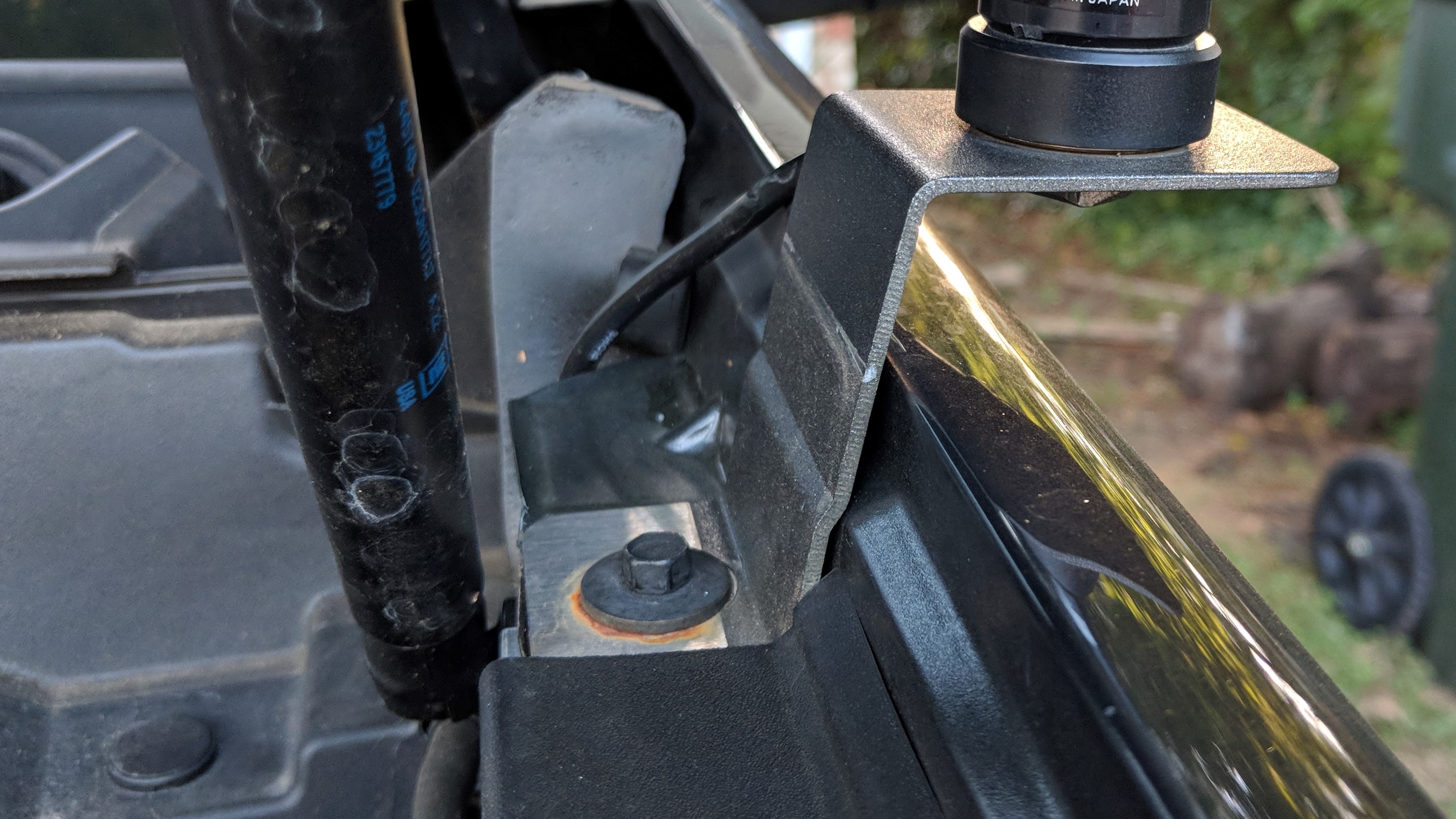 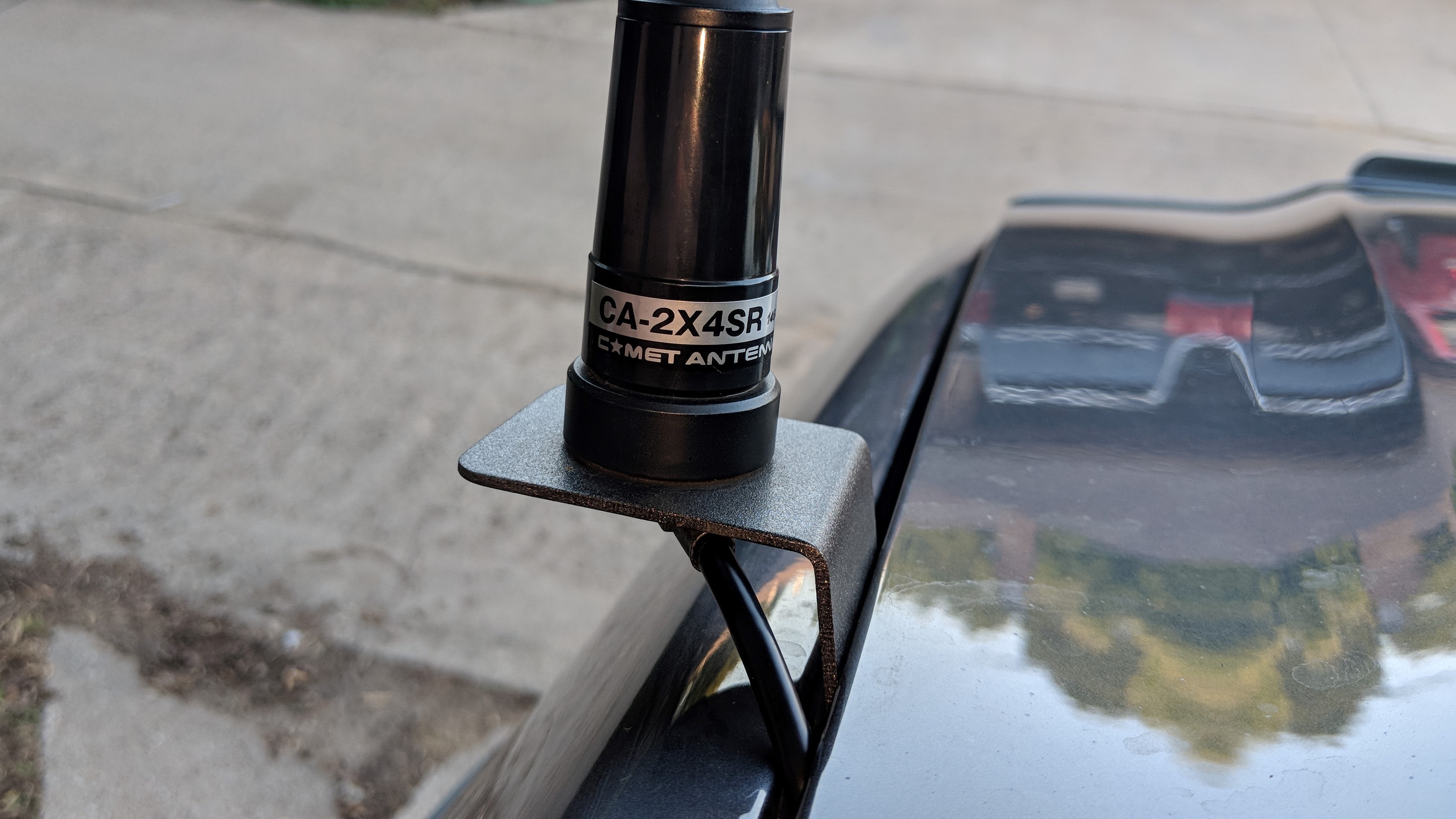 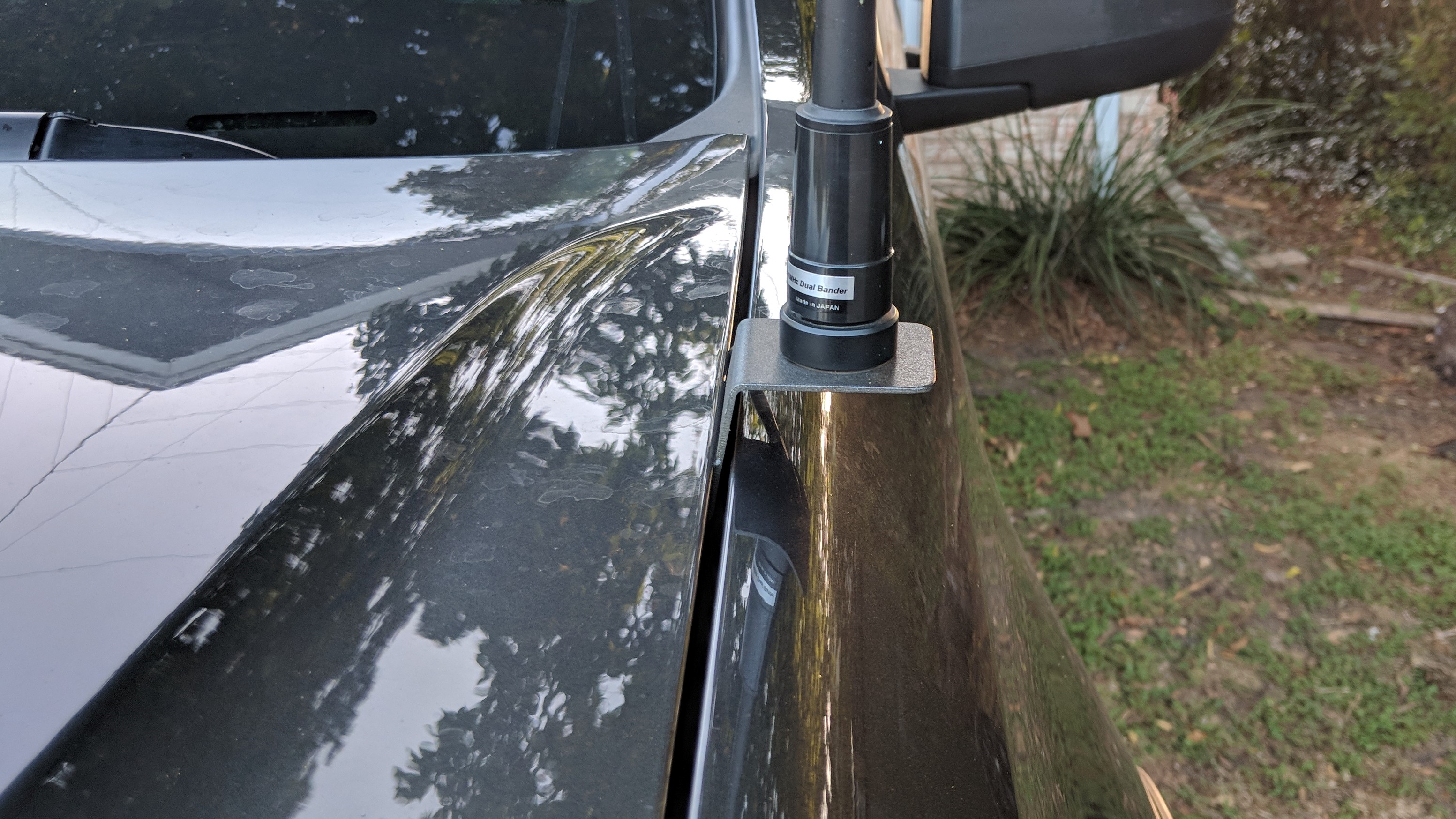