Home » Equipment » Back on the air.. no really

Back on the air.. no really

FlexRadio did a once, twice and three times over on the radio and said everything was fine. They did a firmware update, performed all factory checks on it (at least twice), accepted my payment, and sent my radio back. At this point I’m not exactly sure what the heck happened. I am back on the air and did make a couple of minor changes to the station…

One of the things that Flex suggested was that I invest in a better surge arrestor, or two. So, on their recommendation I bought a couple of the Array Solutions AS-303u units. One is placed at the antenna end of the feedline and the other is near the radio. Both have connections via heavy braided straps to good ground rods that are driven 6 feet into the ground. The reason to have two arrestors is to ensure that I’m protected against a direct strike or against any additional EMF that might be picked up by the feedline between the antenna and the station. 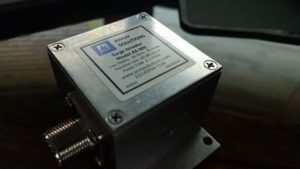 The excellent A-303u from Array Solutions

I also decided to swap out my lines inside the shack. Instead of using UHF connectors, I swapped to UltraFlex 200 with BNC connectors. This makes it easy for me to quickly disconnect the antenna from the radio when I’m not operating, and connect it to the BNC connector which is directly attached to the ground bar. So, if I do get a strike, it is going to go to the ground where it wants to go anyway.

How to ‘hear’ the lightning before it is here

I did a couple of searches to find out if there were any real-time maps which would indicate where lighting is striking in the area, before you can hear the thunder. If you can hear the thunder, you are already vulnerable. My favorite find was Blitzortung which shows a map of real-time lightning strikes around the world. The one which I linked is specifically for the Texas area, since that is where I am located. Play around with the options on the left menu once you go to the site. I in particular like to enable the ‘Detectors’ option at the bottom. It adds lines from the strike location to all of the stations that detected the strike. It is amazing how far stations can hear the electromagnetic energy which is dissipated with the strike. Because there are so may strikes, it is easy to pinpoint the location through triangulation.